Streetwise is an Autobot Protectobot from the Generation 1 continuity family. He is also sometimes known as Streetstar, and other times as Streetsmart.

When the Insecticons attacked an inhabited city on Earth, Optimus Prime called upon the Protectobots to evacuate the civilians caught in the crossfire. Streetwise was carrying civilians when he discovered an injured man and called First Aid over to help him. Later, as Earth's orbit was diverted to the Sun by the Combaticons, Streetwise and Groove commandeered a meat locker to keep the overheated humans cool. Streetwise assured Groove that given the constantly rising temperatures outside, the humans would not freeze to death. The Revenge of Bruticus 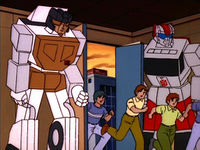 The heat is on, on the street.

Streetwise, as part of Defensor, totally blew up Bruticus. Afterward, he was with the Protectobots when they saved some window-washers from a burning skyscraper, catching the humans when Blades blew them off their platform. Later still, Streetwise and the other Protectobots were ordered to help defend Autobot Headquarters from a Decepticon attack. Streetwise had a crowning moment of glory when he blasted Starscream out of the sky. The Protectobots then merged into Defensor, who activated his useless force field, which almost immediately deactivated, allowing the Decepticons to blast Defensor back into his component parts